thank you to Adam Wolfe comedy for this photoshop

This image was originally created to encourage women to do masculine jobs while men were off sacrificing themselves for the good of the country to protect American interests in a world that was falling into the hands of evil tyrannical powers.  Certain functions needed to continue in this country to support the economy and those men that were losing their lives and risking their lives.  It became, however, a corrupted symbol for women not needing men.

As women continued to promote feminine “rights” to the exclusion of reason, and in opposition to equality and fairness, the female lobby with no self scrutiny and no internally critical voice strove not for equality but for dominance of femininity over masculinity and the subjugation of masculinity in spite of the contributions men had made.  This is a recurring pattern.  These lobbies never go away, they have no incentive to, they get money to continue promoting their cause.   Every month they send out a news letter celebrating their victories, never have you heard of one of these lobbies saying, “well guess what folks, we have accomplished our goals and we are now equal, so we are not accepting any more money and we are shutting our doors”.

Think back to the prohibition…

One of the biggest influences in the prohibition was to monopolize pussy, women wanted control of men so that they could control the happiness of the man in a depressed economy where life was miserable, and those bitches on the left look really stingy, if you know what I mean, the  Woman’s Christian Temperance Union.  You have to understand how the woman edits her consideration set.

Women are only concerned about women and children, they are not concerned for men.  I am saying this because it comes from my theory on evolutionary psychology and neural myelination as it is passed on from generation to generation.  Millions of years of repeated patterns creating the male and female brains, and a touch of hormone rewires the brains to think differently from one another. 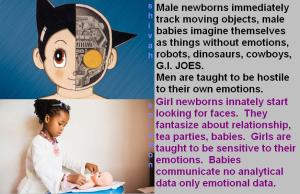 Men and women are essentially the same but were compartmentalized by nature to be specialized in two different arenas that are mutually in opposition to one another.  Protection and nurturing.  Men do not feel that they are increased in value by being men, although for their own protection maybe they should.  Women on the other hand do feel that their value is increased by being a woman.  Men can survive longer in a state of nature right now.  Women in a state of nature will die almost immediately.  The reason that this neural myelination was passed on to us is because THAT IS HOW WE SURVIVED!!!  DEAD PEOPLE DON’T PASS ON NEURAL MYELINATION!!!!   In order to be tough men have to ignore their emotions, but women judging tacitly from analogy think their perspective is superior and judge masculinity and try to turn men into women.  She relies on him and yet she wants him to be like her. 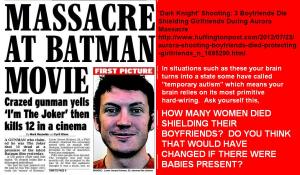 The female mind only concerns itself with feminine subjects.  It doesn’t like thinking about ugliness and evil in the world.  The worst evil the woman knows about is her husband.  But because of a natural and innate arrogance she feels she is superior and tries to turn him into a woman.  She doesn’t want him thinking about manly things, doing manly things, or wanting manly things.  She tries to remove all incentives for him being a man.  He should be happy with what little she provides him in the way of reward and he should not look to indulge his masculine identity elsewhere.

This pattern repeats everywhere in our society and our history.  We the most feminine and feminized nation in the world still blame all of the bad on men and we do so tacitly, men and women.  Listen to people talking as I do being a linguistic philosopher, tally the number of times you hear this conversation… “that lady is insane a real, bitch.”  “Well, some man probably really screwed her over.”  I can’t tell you the number of times I have heard this.  If we deconstruct this for value we see that sympathy is for the woman, and she is not responsible for her own actions, or for the fact that she is not mentally or emotionally healthy, women are allowed to be crazy and self interested, damaged.  They are allowed to throw histrionic fits, and pursue their insane agendas.  The crazy person in the relationship is dominant, trust me, that is the definition of a tyrant. http://terminclature.wordpress.com/2013/09/13/cause-of-the-bad/

The very word “civilization” comes from the word chevalier, the french word for knight, and we see that according to Proto-indo-european it moved over here, across continents and through time.  Men championing the whims of women.  Men the active cause women the passive cause.  And yet, in the most feminine country in the world women STILL do not take responsibility for anything.  Why should they when they can just complain about it and blame men until they fix it for you.

About 10 years ago I downloaded everything I could from I-tunes university and I would listen to it while I drive, because their is a shortage of intelligent conversation in the world which is why I have so many conversations with myself.  Anyway, back to my point, one of the pieces I downloaded was from a black, female, judge in Chicago giving a speech, she talked about the no-fault divorce and  how it was created to get women out of abusive relationships but it created this wind fall of divorce.  She blamed the loss of the American family on women, I thought this very poignant and it led me to look for answers in directions that are forbidden to society.  Unfortunately, I don’t remember her name or I would give her credit, but I thank her for her brilliant synopsis, and her moral courage in speaking out against a group few seem to have the courage to.http://articles.chicagotribune.com/keyword/no-fault-divorce/featured/4

Bill Hicks famously said, and I am paraphrasing because I can’t find the original quote, “the people in your society that you can’t criticize, they are in control.”  and from my perspective that is women.  They don’t criticize themselves and nobody else is allowed to.  They have victim status.  And you can’t say anything even constructively critical to them without being considered a bully.  Society reinforces this.

I am going to show you how this pattern repeats literally everywhere around us through something that recently happened to me. 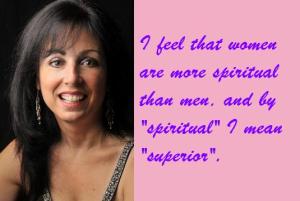 Now this is not a quote, I am using my philosophy and psychological technique to create the verbal equivalent or tautology of what she actually thinks based on her behavior.  This woman poses as a spiritualist and is in all point of fact a closeted man hater.  As such she tries to monopolize spiritual authority as a feminine realm.  Not being gainfully employed she coasts on the money provided her from her rich husband while at the same time, talking shit about men and her husband behind his back.  Wanting his support she also conceals the fact that she despises him.  Being in relationship with past trauma and not wanting to be emotionally and mentally healthy she holds onto her damage as a source of power.  She is a player in a grass roots spiritualist movement in orange county, that tries to marginalize masculine spiritual authority while at the same time increasing spiritual feminine authority.  http://spiritualcoop.wix.com/spiritualcoop

Humorously I wrote a piece on a blog about crediting your sources when you quote somebody or they teach you something you have never heard before.  I was in her group on facebook at the time and she started arguing against the necessity of quoting your sources and it being a form of spiritual theft.  It was ironic because a month earlier she had told my gf at the time that it was ok to use her stuff as long as she quoted her.  The difference between D. Marie and myself is that she is not an original content generator and I am.  I am an initiated shaktipat and jnani guru.  She can’t compete with my creative or spiritual content.  I knew that the people in her group were feminazis and that all they would do is plagiarize my ideas and take credit for them.

Here is another interesting tidbit.  One of D. Marie’s gurus is Jean Houston who at a meeting of  http://sistergiant.com/sistergiant/  gave a speech that basically said women need to be more concernful of men and treat them as equals.  She was complaining about the feminist spiritual movement.  Marie, who get’s some of her authority from being a disciple of Jean Houston basically entirely ignored this exhortation on her part…..