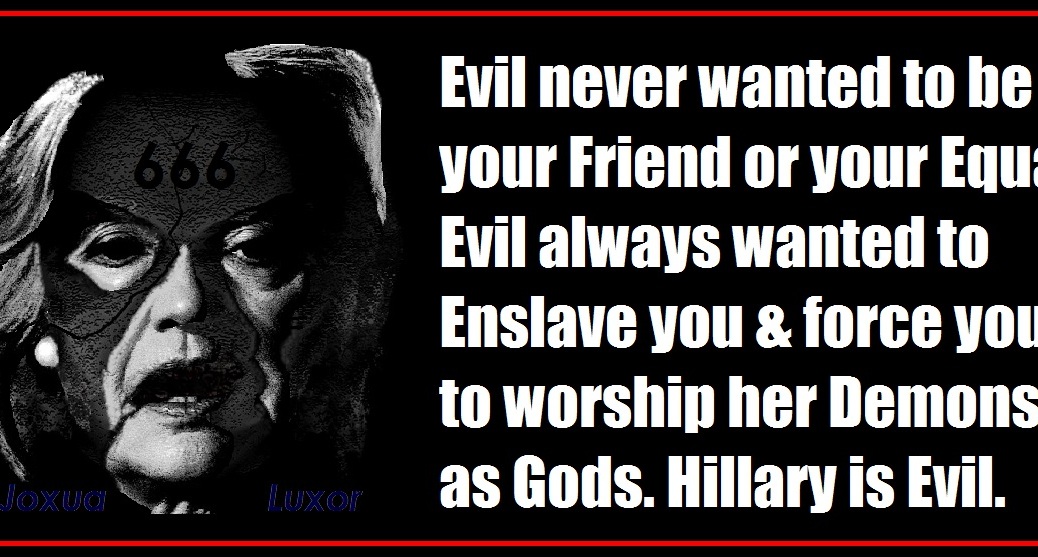 The Special Interests & Liberal Progressives never wanted to be Equal with you under the Law.  They have always been pushing and looking for ways to subjugate you & force you to kneel before their authority.  They want you to Recognize their Delusions, Diseases, & Issues as Physical Reality and if you don’t they want to attack you physically, trespass your boundaries, and steal your resources.  Hillary Clinton didn’t make millions of dollars offering a product or a service, she got rich selling Americans down the river.  Democrats never gave up on Slavery they just expanded the Democrat Plantation to include all of America.  Slowly but surely they have been monopolizing one sector after another.  They own the Ghettoes (Modern Day Plantations), they own the Labor Unions, they own the Actors & Musicians, they are making a grab for Health Care, they are attacking the Police so that they can replace them with their own Police Force.  The only people that are voting for Hillary or Advocating for Hillary are violently stupid, useful idiots and the Consciously Evil.

I warned you in 2014, when I created the Ban Sharia brand. Do you know how many of my predictions came true or are coming true? Your ignorance of How Moslems think & What they teach is not going to protect you from their evil.

If Moslems are peaceful why would they want Sharia Law?  If Islam is a Religion of Peace why is the Purest form of Islam Sharia Law?  Do you think Saudi Arabia and Iran are somehow practicing Islam Wrong?

If Moslems don’t want Sharia Law banned in the United States of America then Islam should not be categorized as a Religion but as a Violent, Tyrannical, Subversive, Political Ideology. 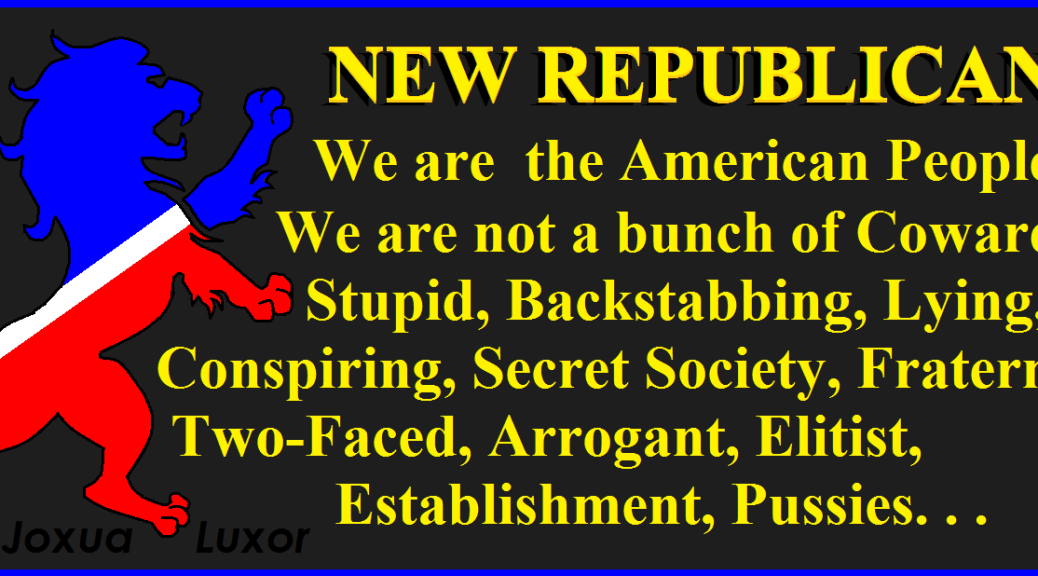 NO TAXATION WITHOUT REPRESENTATION!!! 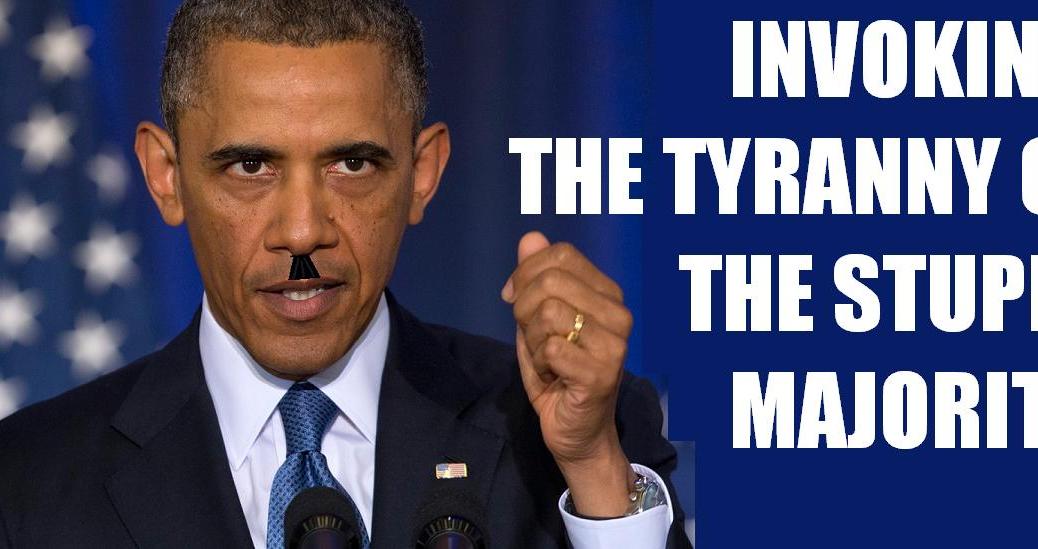 1. arbitrary or unrestrained exercise of power; despotic abuse of authority.
2. the government or rule of a tyrant.
3. a state ruled by a tyrant.
4. oppressive or unjust government.
5. undue severity or harshness.
6. a tyrannical act.

Obama has embraced identity based politics and in doing so he is catering to the tyranny of the majority in order to arbitrarily turn the tide of public opinion in his favor.  Name dropping Ferguson Missouri in front of the United Nations, how would he feel if Michele Obama aired their dirty laundry in public?

Catering to the Mexican vote and the Vote of the Muslim majority the fastest growing population of the most illiterate and violent people on earth, is an obvious breach of protocol.

The phrase “tyranny of the majority” (or “tyranny of the masses“), used in discussing systems of democracy andmajority rule, involves the scenario in which decisions made by a majority place its interests above those of an individual or minority group, constituting active oppression comparable to that of tyrants and despots.[1] In many cases a disliked ethnic, religious or racial group is deliberately penalized by the majority element acting through the democratic process.[citation needed]

Supermajority rules, constitutional limits on the powers of a legislative body, and the introduction of a Bill of Rights have been used to counter the problem.[2] A separation of powers may also be implemented to prevent the problem from happening internally in a government.[2]

Obama, is planning on writing laws and passing them all by himself. 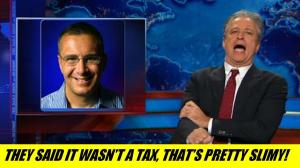 Obama was touted as the next Abraham Lincoln.  Lincoln was the great Uniter, he brought the people together and kept the Union in tact.  Obama is more like the great divider, we have never been more divided as a nation, Feminists, Christians, Muslims, Mexicans, Homosexuals.  It is more like he is trying to start a Civil War than prevent one.

Obama, intellectually, never developed beyond the point of being a biased lawyer, he never even tried to become the mental equivalent of a judge.  He was always one sided and prejudiced.  He has always been on one side, his own side, projecting his sense of self onto people that he identifies with and incapable of being impartial and judicious. 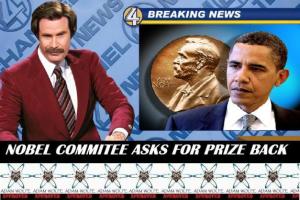 Our government was created to be a meritocracy of Reason and Results, not a tyranny of issues.  The world is not a better place since Obama’s rule began nor is the Nation.  To reward people based on their issues and their feelings of victimization when they haven’t raised themselves to a place where they can create value for people other than themselves, and to put them in positions of authority as equals is a sabotage of our government.  Failure is not equal to success.  Reason is not equal to unreason.  Tacitly validating people’s emotional appeals is a dynamic tautology of a logical fallacy.  The intensity of your emotion doesn’t make you any more correct.

In order to unleash the HIGHEST COMMON GOOD you need the consent of the wisest and most reasonableand most educated.  What Obama is doing is invoking the LOWEST COMMON GOOD.  He is dragging all Americans down to equality with hood rats, and welfare babies in the ghettos of the United States that only parasite off the economy, and they will only ever parasite off the economy because while they benefit from an increased quality of life in the United States they are also contemptuous of our values, the values that create the surplus that creates their quality of life. 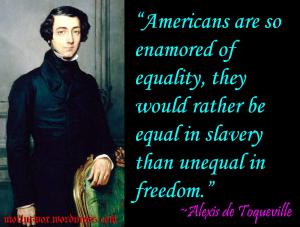 There are certain terms that are synonymous with tyranny.

Arbitrary comes from the Latin arbitrarius, the source of arbiter; someone who is tasked to judge some matter.[2] An arbitrary legal judgment is a decision made at the discretion of the judge, not one that is fixed by law.[3] In some countries, a prohibition of arbitrariness is enshrined into the constitution.  http://en.wikipedia.org/wiki/Arbitrariness

When one rules in such a way as to create a disparate impact in favor of a people incapable of reimbursing or equitably returning whatever they were granted, and without an inclination to be appreciative for whatever gain they accrue from the source of that accrual, that is an act of theft and sabotage.  That is rewarding failure and punishing success.

I will leave you with this…

We hold these truths to be self-evident, that all men are created equal, that they are endowed by their Creator with certain unalienable Rights, that among these are Life, Liberty and the Pursuit of Happiness. That to secure these rights, Governments are instituted among Men, deriving their just powers from the consent of the governed;[7]

We…solemnly publish and declare, that these colonies are and of a right ought to be free and independent states…and for the support of this declaration, with a firm reliance on the protection of divine providence, we mutually pledge our lives, our fortunes, and our sacred honour.”

That whenever any Form of Government becomes destructive of these ends, it is the Right of the People to alter or to abolish it, and to institute new Government, laying its foundation on such principles and organizing its powers in such form, as to them shall seem most likely to effect their Safety and Happiness. Prudence, indeed, will dictate that Governments long established should not be changed for light and transient causes; and accordingly all experience hath shewn that mankind are more disposed to suffer, while evils are sufferable than to right themselves by abolishing the forms to which they are accustomed. But when a long train of abuses and usurpations, pursuing invariably the same Object evinces a design to reduce them under absolute Despotism, it is their right, it is their duty, to throw off such Government, and to provide new Guards for their future security. 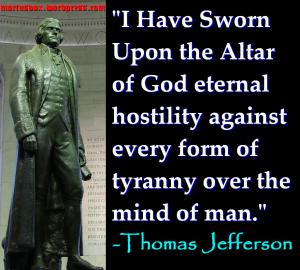