The First 4 words of the Hebrew bible are quite significant.

This isn’t as straight forward as the English translation would make it :

“In the beginning God Created”

If you are familiar with Jewish Exegesis (http://en.wikipedia.org/wiki/Pardes_(Jewish_exegesis)) It doesn’t predispose itself to immediate understanding because it is supposed to be meditated on for Kabbalistic secrets.

It can be interpreted as Be Reshit, or with wisdom, Elohim.  Or it can be interpreted Bara Shit, Created 6.  Which is a reference to the 6 Sephira, Gevurah, Chesed, Tiphareth, Hod, Netzach, and Yesod, corresponding to the 6 days of the week, the reason that the supernal triad isn’t mentioned is because they are before creation, prior to physicality or objectivity. 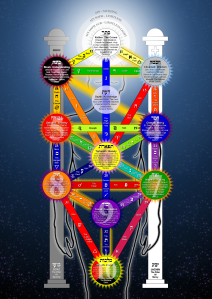 So it interprets too, With Wisdom, Elohim. Or Created Six, Elohim.  Not so cut and dry is it?  The act of Creation was the act of the coming into being of the physical world, from the immaterial world, or in other words, the Big bang.

The word “Elohim” exists in the Hebrew as well as Muslim vocabulary.

the typical Muslim Greeting means, “Peace to the Elohim”.

L’chaim with a similar phonology means “to life.”

Interesting and Ironic that Muslim women, Chassidic women, and Nuns cover their hair so that they will not attract the attention of the fallen angels and attract their lust.  This is particularly ironic considering how much more prevalent and acceptable rape is in the Muslim culture than the other cultures, but if you had read my other pieces you would not be surprised. (https://thoughtuncommon.wordpress.com/2014/11/18/rabbi-baal-shivah-the-origins-of-islam-the-non-abrahamic-religion/)

Now according to Jewish interpretation, and Muslims claim to use the same bible as Judeo-christians while they twist the scriptures, YHWH ELOHIM represents “a complete name,” representing respectively the divine qualities of compassion and justice.  Being that YHWH represents the feminine agencies of Binah and Malkuth as mother and daughter, and manifestations of one another and Tiphareth and Yesod as Elohim, their bride groom in the form of a Righteous Man or a Tzaddick.

Now the Name “El” can refer to the Elves, AngEls, Elders, and what have you as the facets/faces angles/angels of God’s personality.  But there is another explanation…

In the Canaanite religion, or Levantine religion as a whole, El or Il was a god also known as the Father of humanity and all creatures, and the husband of the goddess Asherah as recorded in the clay tablets of Ugarit(modern Ra′s Shamrā—Arabic: رأس شمرا‎, Syria).[4]

The bull was symbolic to El and his son Baʻal Hadad, and they both wore bull horns on their headdress.[5][6][7][8]He may have been a desert god at some point, as the myths say that he had two wives and built a sanctuary with them and his new children in the desert. El had fathered many gods, but most important were Hadad, Yam, andMot. ” http://en.wikipedia.org/wiki/El_(deity)

If you are familiar with my writings you know that Mohammed rebranded the ancient Persian/Babylonian child sacrifice cults of ancient Babylon bent on global domination.  The Jews who separated themselves from them because they fundamentally disagreed with them were constantly being dragged back to Babylon and “re-educated”.  The Babylonians, as the Muslims, have a strategy for taking over the entire world and submitting them to their Sharia law.  They breed irresponsibly, (https://thoughtuncommon.wordpress.com/2014/09/14/muslims-ishmael-and-judas-iscariot-by-rabbi-baal-shiva/)

They use rich lawyers to vexatiously litigate and change your laws so that you compete on a slanted playing field and then they bring in Sharia law and establish caliphates.  They train their children to only listen to their priest class, and they only have 3 books.  They teach their children the time will come when they have to kill all of the jews and anybody that doesn’t submit to their ideology.

Did Jesus worship Allah? I don’t know that all of Jesus meanings have been uncovered, what we do know is that Jesus despised the Babylonian Jews that practiced the Abrahamic Law Code instead of the Mosaic Law Code, so it would be very unlikely.  I personally think he was asking why the angels had abandoned him, why the Elohim had abandoned him as indeed most of his disciples had abandoned him and still others abandoned him in their hearts, it must have been very trying even though he had foreseen it.

Some in the crowd who heard Jesus cry out “Eli Eli . . .” from the cross thought he was calling on Elijah. Sadly, even those Jews who thought Jesus was crying out for Elijah, had NO compassion for him, but used what they thought they heard to taunt him.

“Some of those who stood there, when they heard that, said, ‘This Man is calling for Elijah!’ Immediately one of them ran and took a sponge, filled it with sour wine and put it on a reed, and offered it to Him to drink. The rest said, ‘LET HIM ALONE; LET US SEE IF ELIJAH WILL COME TO SAVE HIM.'” (Matthew 27:47-49)

“Some of those who stood by, when they heard that, said, ‘Look, He is calling for Elijah!’ Then someone ran and filled a sponge full of sour wine, put it on a reed, and offered it to Him to drink, saying, ‘LET HIM ALONE; LET US SEE IF ELIJAH WILL COME TO TAKE HIM DOWN.'” (Mark 15:35-36)  http://www.biblestudy.org/question/meaning-of-eli-eli-lama-sabachthani-spoken-by-jesus.html