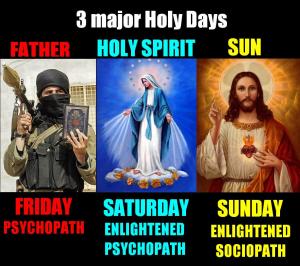 In an effort to continue explaining Islam and the difference between the religions to my Atheist friends, Fidem Turbare, Chris Roberts, and Robert Watson, I created a little photoshop.  In my last blog we discussed how Islam borrowed the bible since the religion was created after Judaism and Christianity, and reinterpreted and retold the scripture of the struggle of the Jewish people to get away from Muslim people by going west.  Last night I went into a meditative trance, and came back with a lot of material, a lot more than usual.  I admit that it isn’t normal not a lot of people can do it.  I am still trying to understand how I do it.  I think it has to do with highly functional schizophrenia, but I think there is more to it than that.  I haven’t been diagnosed with schizophrenia, by the way, I also practice Nei gung which is a very rare practice of contacting the yin world, Dark Matter and Dark Energy and making alliances with Yin Creatures and absorbing yin energy.  If you are interested you can read more here.  http://adstc.wordpress.com/2014/01/26/the-yin-world/

As we discussed the ancient Persians were constantly trying to expand and increase their empire over all of the earth. ( http://en.wikipedia.org/wiki/Xerxes_I#Invasion_of_the_Greek_mainland)  and to force everybody to submit to their superiority.  Also it was these people that were constantly on the look out for the new messiah, who would reveal them for the liars they are and their true identity.  Observe the scriptures.

But when he saw many of the Pharisees and Sadducees coming to where he was baptizing, he said to them: “You brood of vipers! Who warned you to flee from the coming wrath?

Notice the similar phonology between the words Pharisee, Pharoah, Persian

The pseudo-Latin farsia was applied 13c. in France and England to praise phrases inserted into liturgical formulae (for example between kyrie and eleison), then in Old French farce was extended to the impromptu buffoonery among actors that was a feature of religious stage plays.

In other words to force, this is interesting to me because of the extra syllables that Muslims will add when they are shouting, they add extra syllables to extend the word.  To observe what I am talking about watch this video.  (https://www.youtube.com/watch?v=3gzqsmx1KGU)

In Persian classical music, singers frequently use tahrir (“tremolo” in English), a yodeling technique that oscillates on neighbor tones.

author of Yodel-Ay-Ee-Oooo: The Secret History of Yodeling Around the World, explains the technique:

“The basic yodel requires sudden alterations of vocal register from a low-pitched chest voice to high falsetto tones sung on vowel sounds: AH, OH, OO for chest notes and AY or EE for the falsetto. Consonants are used as levers to launch the dramatic leap from low to high, giving it its unique ear-penetrating and distance-spanning power.”[12]

What this means to me is that they were essentially screaming the word JJJJJJJJJJEEEEEEEEEWWWWWWW!!!!  Through the mountains to intimidate any jews that might hear it and it became a style of music, and then it immigrated to the united states in the form of German Americans, fascinating.   Yahūd   is the Arabic term for Jew, now observe:

Ok, enough, of the tangents, I will come back to this later, I might track down the haplo-groups and explain this through my neuro-myelination theory and what it has to do with Hitler, and how people make decisions.

Back to the top image, and the significance, Mohammed, by instituting the Muslim holy day before the other 2 was trying to pre-empt them, thereby making them irrelevant and silencing them and forgetting about them.  We see this same pattern in UK not teaching the Holocaust because it will offend Muslims, and the book burning of the Germans during Hitler’s rule, the same impulse.

What this pattern tells me is that some time in the past a woman married to a Persian Jewish Male had a son, and that son was different, and she loved that son and wanted to protect him from the father.  She taught the Son all about the Father, why he was a bad man and why he needed to be stopped.

Most of you have probably never heard of Alchemical art, indeed even I haven’t heard of it, but I didn’t make it up.  There is symbolic significance in the ancient classics, I only know about it because I know how people think because I speak their language so to speak, and my obscene ability of pattern recognition.

The colors of Rome were red and white, the colors of Greece were blue and white.  The Jews are more Greek because they Helenized and absorbed the Greek philosophy and culture, Mary is almost always shown in Blue and White, because these are the colors of the Shechinah.

Shekinah, Shechinah, Shechina, or Schechinah (Hebrew: שכינה‎), is the English spelling of agrammatically feminine Hebrew name of God in Judaism.

The Greek flag is blue and white as is the flag of Israel. 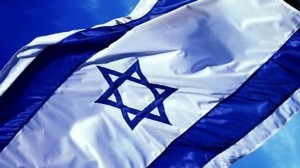 Columbia tri-star image is also blue and white “tri-star” is a reference to the trinity, think of the emblem on the mercedes, mercedes means, our lady of mercy.

The toga is the Garment of peace, this comes from our common shared heritage with India.  If you don’t believe me you can click here (https://thoughtuncommon.wordpress.com/2013/09/11/cedante-arme-togae/)