When I say “the female brain” I am referring to several things: the emergent patterns in the way women as a group behave and make judgments, men that have been indoctrinated into the moral superiority of women, and in a conflict or a relationship the more irrational person or psychopathic person, male or female.

I will give a brief synopsis of my theory on “organic computers”, Neural Myelination is passed on through cellular memory, successful techniques are passed on by people that survived, patterns that were repeated are neural myelinated, this myelination influences the way we perceive reality and make judgments, our judgments were informed by the need to survive of our ancestors, those patterns were created in situations where survival was difficult, those instincts in modern times can be out of touch with reality.

Now, Nature, for lack of a better word compartmentalized functions into male and female functions.  The consideration set of the female mind was edited to be concerned with and for babies, to presuppose an environment created for her in which she could indulge herself in the concern for which her brain was created.  In doing so the female brain makes certain presuppositions and ignores certain factors.  Those concerns which would not be conducive to taking care of a child but would be useful in providing a safe environment for woman and child were the business of the male mind.

Men and women are essentially the same, but compartmentalized by nature to deal with two different concerns and topics in two different ways.  I discovered this when creating my psycholinguistic philosophy.  My philosophy states.

Which seems innocuous at first but it is much deeper than one might expect.  All narrative is point of view, which means that everything said characterizes the person speaking *(assuming you know how I deconstruct narrative).  It wasn’t until I started studying Deborah Tannen‘s research on Male and Female communication patterns that I realized there were two completely different consciousnesses talking to one another.  She refers to this as complimentary schizmogenesis, I think it is more like two alien species that have different values and speak two different languages. 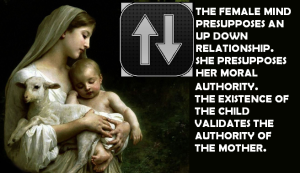 Babies start off as objects, entirely dependent on their mothers, incapable of doing anything for themselves.  They can’t defend themselves, think for themselves, or provide for themselves.  Babies communicate no analytical data and only emotional data, so from the perspective of the female mind emotions have to be valid.  That which has NO value or negative value in the heat of battle is valid to women.  Deborah Tannen refers to the interpretation of the emotional data by these little piss and shit factories as “ventriloquizing”.  Where the woman acts as the pythian oracle to interpret the omens sent to her through the medium of the squirming and whining of the child.

The mother protects the child’s psychosis and aberrations as well as the child.  She doesn’t care if the child is insane, or is capable of dealing with the world at large, that has never been a concern for her, she has a man for that.  She just wants the child to live and be as happy as possible.  This is why historically there was an age or a trial to mark the end of the authority of the mother and the beginning of the training and teaching that would make the child suitable for their transition to the world.

The mother manipulates the child to do things and to think that it was the child’s own idea.  Women use these exact same strategies on men if they can get away with it.  That is just how their brain works.  Women also keep on bringing the attention of the child back to a subject and then communicating emotional data to try to influence the way the child feels about the object.  When women do this to men it is called nagging and whining, or henpecking.  I call it jingling the keys.

Allow me to illustrate in this way.  The Neural Myelination created over millions of years predisposes us to think that foods that are more densely packed with Macro nutrients are good for us, because that neural myelination was created in an environment in which survival was difficult.  The more packed with positive survival data it is, the better it tastes, to the point where the animal will never eat its natural diet if it has the option.  This makes the horse fat and sickly to the point of death.  Neural Myelination wasn’t created in an environment where survival was easy so our instincts are WRONG!  We as a society redouble our efforts in the wrong direction, compounding the problem because we are not aware of the organism through which we experience life and we are thinking sentimentally instead of analytically and logically.  If you don’t know the logical fallacies and the cognitive biases you can’t keep yourself from making them.

*It always annoys me when I tell people that everything said characterizes the person speaking and then they start trying to psychoanalyze me without knowing my method and having NO experience themselves, and never having thought about it until I brought the subject up.  What a bunch of idiots.